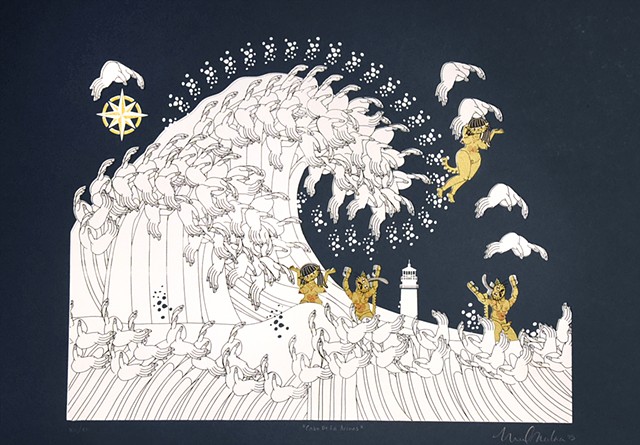 Edition of 12; Variable Edition of 7 Acrylic Ink on 100lb paper

Cabo de las arenas was the name given to Cape Cod by the Portuguese explorer Estevan Gomes in 1525 while sailing under the Spanish crown. Menchaca’s print features a great wave, a nod to Katsushika Hokusai's famous uki-oe woodblock print. The drips of Hokusai’s great wave are replaced with white claw-like hands clasping towards a group of figures struggling in the water. The figures represent the Algonquin natives who were liquidated upon the discovery of the cape by European pilgrims who settled in the region. In the distance, Menchaca has substituted Hokusai’s depiction of Mt. Fuji for the historic Cape Cod Light, a symbol now synonymous with the cape and one of the oldest still-standing light houses.